The Origins of Places and Their Names: The Irish of St. Columban

From the April 2006 edition of Main Street

In the province of Leinster, Ireland, in the year 560, Columcille was obsessed with the beauty of his master’s book of psalms. In the dark of night, he secretly copied it. A monk, he was also a capable warrior, once named Crimthann, the Fox. When he was forced to give up his copy, his injury festered, contributing to an act of revenge for the death of one of his followers. His revenge left him victorious and in possession of his copy of the psalms, but he was still a monk, and the Church exiled him, setting him to the task of converting 3001 souls to Christianity in penance for those he had killed.

Today, he is known as St. Columba, from the Latin for dove, the Irish monk who set the pattern for the Irish monastic tradition that brought writing back to Western Europe after the fall of Rome. The abbey structure that he established included simple huts for the monks, a dining hall, a kitchen, a scriptorium for transcribing documents, a library, and the fundamentals of a good farm. When an abbey reached 150 monks, a leader would choose 12 monks, as Columcille had done upon his exile, and would set off to re-establish at a new location. One of his successors, St. Columban, also of Leinster, was a monk with a much less violent history. Following St. Columba’s example, he set off for the Continent with 12 monks and established some of the most important abbeys of the seventh century.

In 406 AD, the Rhine River had frozen solid. The Rhine and the Danube had always kept the eastern tribes out of the Roman Empire, but that winter the Rhine ceased to be a barrier to the Vandals, allowing them to establish a permanent beachhead on their far shore. Thereafter, barbarian hordes poured west destroying the very fabric of Roman society. While the Church hierarchy withstood the onslaught, most of the written culture was lost. The tireless monks of St. Columba created abbeys and diligently transcribed and preserved the old documents that had remained out of reach in Ireland. They spread their copies throughout their network during the Dark Ages. In the process, they had a huge impact on all aspects of European life.

Father Patrick Phelan, a Gentleman of the Order of St. Sulpice, was born in that same Irish province, Leinster, in 1795. While his family moved to Boston, his vocation took him to the Grand Seminary in Montreal. His ordination to the priesthood coincided with the arrival of a first wave of Irish immigrants, and the Bishop of Montreal encouraged him to join the Sulpicians in order to minister to these new, impoverished arrivals.

The Sulpicians, whose founding vision had resulted in the creation of Montreal, owned a seigneury north of Laval, centred in Oka. Like St. Columban, their vision was of an order of brothers and priests who would minister to the needy in the name of the Holy Roman Catholic Church.

Father Phelan would have known about his Leinster predecessors, and about St. Jerome, among the earliest of monks, and St. Scholastica, the soul sister of St. Benedict. He encouraged his Irish immigrants to colonize the territory in the northeast of the Sulpician seigneury and he founded their parish, naming it for his spiritual forebear.

As early as 1825, there were 250 people in the homestead, and others not far away in St. Jerome. The success of a settlement of Irish Catholics was dependent upon a strong parish priest, but in the beginning, they had not even a chapel, traveling to St. Scholastique when they must. This lack was mitigated by the erection of a cross, allowing them to go to it and pray when time did not permit the longer overland trip to the nearest church. Well after their first chapel was finally built in 1831, at the location of the cross, the early settlers continued to refer to a trip to the chapel as ‘going to The Cross’. 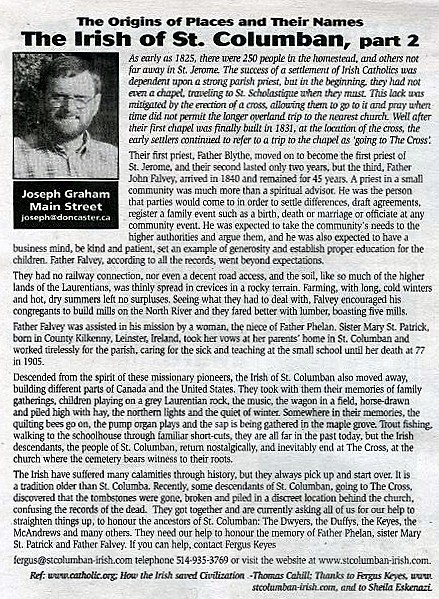