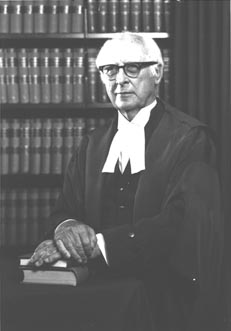 Emmett Matthew Hall may not be the first name that pops into your head when it comes to a Cool Canadian, but once you hear of his achievements, it will be impossible for you to forget him.

Emmett Hall was born in St.-Columban, Québec, in 1898 and moved to Saskatoon when he was 12. From there he went on to study Law at the University of Saskatchewan, and became friendly with future Prime Minister John Diefenbaker. Once he graduated in 1919 he practiced law in the province until 1957 when Diefenbaker appointed him to preside over Saskatchewan’s Court of the Queen’s Bench. He was later promoted to Chief Justice of Saskatchewan in 1961, and then just a year later he was appointed to Canada’s Supreme Court. Though he served on the Supreme Court for 11 years it is not his rulings there that have left him in the minds of Canadians.

Hall’s achievements that are listed below are as unique as the man himself: